I like watches. I got my first one when I was 4 years old; it was of course a child’s plastic watch (the ticking movement was a playground seesaw), but it was high tech in it’s own way–it was transparent and you could see the plastic colored gears turn inside of it. One of the first, school-aged, childhood conversations I can remember was in kindergarten and was centered around my cool (and in my 4 year old mind, space-age) watch and the recent moon landing.

No matter how cool in kindergarten, it didn’t take me long to outgrow the watch with the seesaw. The next watch I remember was around the 2nd grade; it was a Timex and had a very wide leather strap with two rows of holes and a large brass buckle. I wore that watch until I got my first digital watch during the 5th grade. It was a plastic LED watch with a vinyl faux denim strap. I wore that one until I got to 7th grade. Between grades 7 and 11, I probably wore a couple of different watches; a Timex camper watch and an Armitron digital watch stick out in my memory a little. 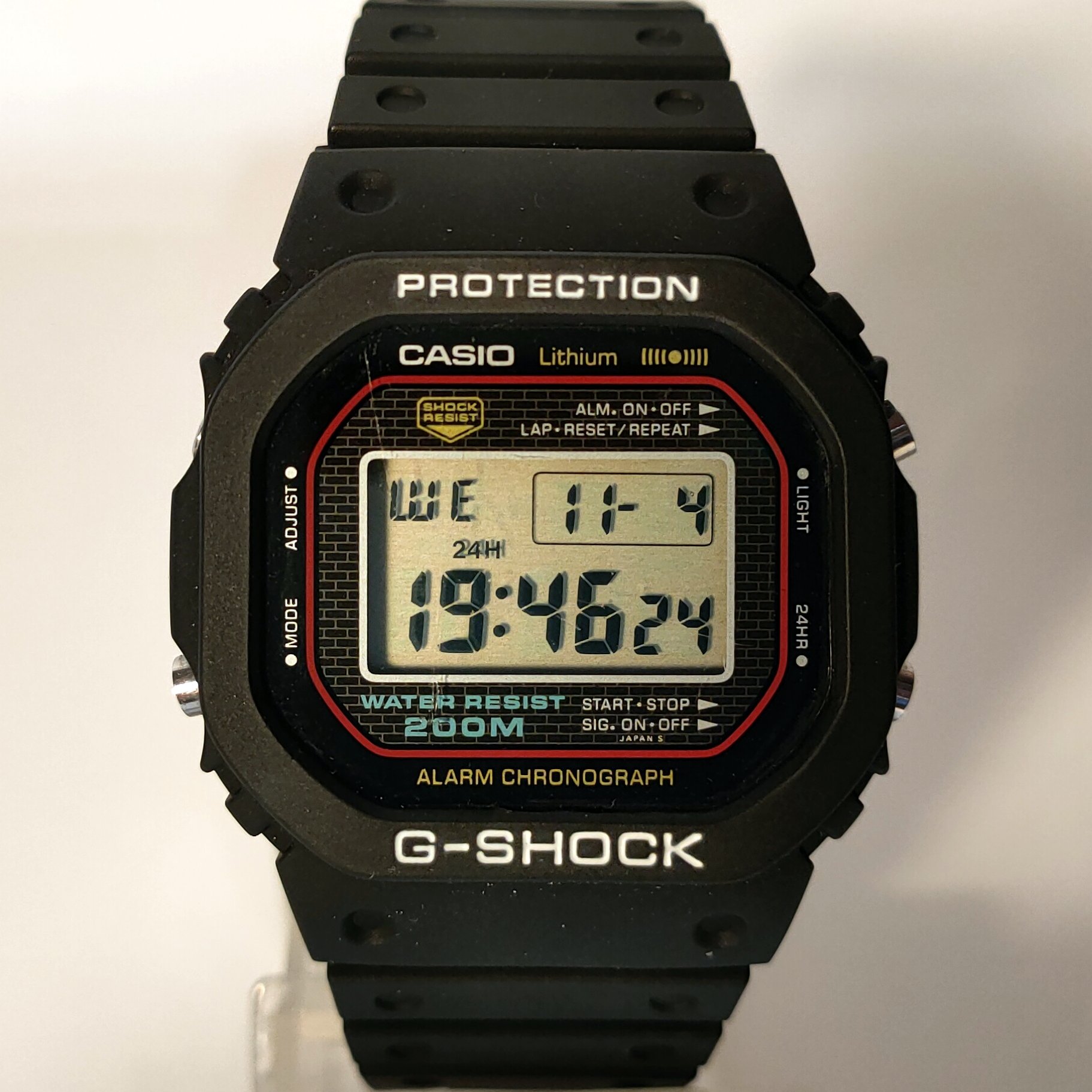 Sometime during my senior year of high school in 1983 or ‘84, my dad got me a 1983 Casio G-Shock DW-5000. This watch really doesn’t need to be described since it’s been around (i.e. in continuous production), in multiple variants for so long that practically everyone has seen one. This was the first G-Shock watch, and it was cool! It looked cool (it was square and had this perfect 80’s aesthetic without being in-your-face or over the top). It was tough; there was a TV commercial for this watch showing the watch being hit into a goal with a hockey stick that made the old Timex it takes a licking and keeps on ticking claims seem laughable. It was water resistant to 200 meters. And it had ridiculously good battery life.

This watch (and it’s cousins in the G-Shock 5000 series) is the watch that I have worn almost continuously since 1983. When I say almost continuously, I mean with exception of a couple of years in college with a very nice gold Seiko chronograph, a brief one year stint with Russian mechanical Vostok Amphibia, and the occasional hour long runs with a Garmin Forerunner, the square G-shock is the only watch I have worn for almost 40 years. I currently wear the G-Shock GWM5610-1. This watch is my favorite G-Shock to date, mainly because it so closely resembles my first G-Shock, but also because it is solar powered and always accurate since it receives nightly updates from the atomic clock.

Needless to say, I am creature of habit, and I really love the G-Shock 5000 series watches.

Even though I could happily, and easily, wear this watch for the rest of my life, there is still one watch left I want to own: the Omega Speedmaster Professional–the first watch worn on the moon, and the one I was unknowingly talking to a friend about in kindergarten.